Our topic this month discusses how confrontation creates powerful drama. Here is a brief explanation of a scene from my Regency Romance, His Dark Enchantress.

I do not like wimpy heroines and this scene is the result of Emmaline taking matters into her own hands. Lord Clifton had gone to the races at Epsom and wanted his barouche to collect him at a certain time. The coachman was injured by one of the horses when they were being harnessed and suffered a concussion. Emmaline decided to drive the barouche in his place, not the typical action of a young lady in this era. The equivalent today, I think, would be a guy being incensed that his girl drove his muscle car! After Lucius rides off, Emmaline decides it is time for her to return to her home in Devon. She leaves London; he doesn’t know where she is, she doesn’t know he is looking for her. As clarification, the term ‘John Coachman’ referred, usually, to a coachman for hire rather than a coachman fully employed in someone’s service.

That Emmaline was totally capable of driving a four-in-hand is explained elsewhere in the book. I was actually taken to task over this element in my story, my reviewer mentioning that it would not be possible for a young lady (Emmaline is 24 years old) to drive such a team. My inspiration for this scene was Mrs. Cynthia Haydon (1918 – 2012) who bred and drove Hackney horses which she had done so since she was quite a young girl. I had the great pleasure of watching Mrs. Haydon on several occasions at various horse shows in England.

He spoke quietly but with stern authority and Noble simply went to do his bidding. Lucius stayed in the ménage, his jaw clenched so tightly it hurt, his temper barely under control. He returned to the barouche and looked up at his coachman.
“What in hell’s name possessed you to imagine you could drive my horses?” he demanded. His voice cracked with anger.
“Imagination did not enter into it,” Emmaline returned.
Lucius was so furious he missed the tremor in her voice.
“You could have overturned the barouche and injured my horses. You, Juliana and Noble could all be dead. Did you think of that?”
“No, I did not.” Emmaline stood up on the box. “And don’t shout. I am not deaf.”
Lucius paid her no heed as she scrambled down from the driving seat. “What if you had been recognized? How would it look for my team to be driven by a woman?”
“Is it your horses, your people or your reputation for which you are concerned, my Lord?” Emmaline quivered from head to toe as she looked up at him.
His grey eyes glinted with fury under drawn brows and he lifted his hands, fingers outstretched. She took an involuntary step back from him but he caught her shoulders in a firm grip and shook her until her teeth rattled.
“I take my responsibilities more seriously than apparently do you,” he shot back at her. He released her as quickly as he had held her and she staggered back against the wheel of the barouche, felt the hard rim press between her shoulder blades. “I do not hide behind a borrowed tricorn nor pad my shoulders with a rolled sheepskin.”
He towered over her, his face overshadowing hers but all he saw was a vision of her on the ground in a tangle of broken limbs. How could he explain that to her family and to his peers? What would his life be without her in it? He shook his head to clear it and for the first time saw the fatigue in her face, the warring expression in her eyes.
She was as angry as he, but beneath the anger there was something else, something he could not immediately determine as she drew herself to her full height. Her eyes blazed like blue beacons and her lips were as bloodless as her face.
“I will tell you, sir, neither your horses nor your people were ever in danger. I thought only to do you a service when your coachman was injured, and instead I am reviled and castigated for it.”
Around them the air vibrated with their anger, was felt in the darkness of the stable where Noble waited with the grooms and the hack. Neither combatant had heard the crack of the door or scrape of the window as members of the household listened to the furious argument.
For a moment Lucius said nothing, his mouth clamped into a thin line. His gaze raked over her once more.
“I have to tell you, John Coachman, that you have impressed me in ways you cannot possibly begin to imagine.” His voice was calm but vibrated with a dangerous undertone which chilled Emmaline to the bone. “However, there is no room for you in my employ and I do not wish to see you here ever again.”
The words were spoken softly but as sharply as the crack of a whip. The words flayed Emmaline’s fragile hold on reality.
He never wanted to see her again.
Her heart pounded so hard in her chest it sent her blood roiling in her veins and blurred her vision. Lucius caught her hand, into which he pressed something hard.
He called for his horse and Noble brought up the hack. Lucius vaulted into the saddle.
She looked up into his white, handsome face. The moonlight shone on the flat planes of his cheeks and shadowed his eyes but she could see the furious glitter in them. As he spurred his horse forward the sound of its iron shod hooves clattering and scrabbling on the cobble stones, rang loud in the clear night air.
Emmaline, drained of all emotion, staggered back and grasped the wheel rim for support.
The yellow rind of a full moon peeped above the roof tops and chimney stacks, casting their linear outlines into sharp relief. Moonlight illuminated the silvery trail of a single tear as it rolled slowly down her cheek. She dashed it away and uncurled her fingers to see what Lucius had pressed into her gloved palm.
There, glinting in the cold, pale, light was a single golden guinea.
It weighed as heavy as thirty pieces of silver. 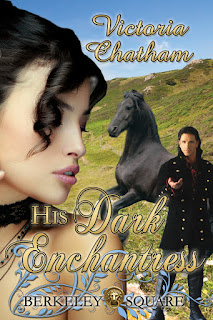 Currently on sale for .99 cents

I hope you have enjoyed this excerpt and will enjoy others from these fine authors.

Posted by Victoria Chatham at 1:30 AM 10 comments: