Felicity at the Cross Hotel 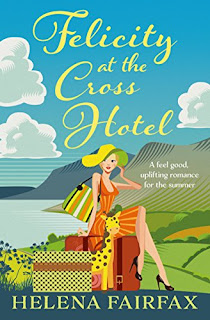 I have just finished reading this book and really loved it. I found the all the characters engaging, plausible, and despite mixed messages and misunderstandings between them, it all worked out to be the happy ending readers of contemporary romance look for.

The tagline on the cover says "A feel good, uplifting romance for the summer" but this is a good read any time of year. I was happy to leave a review for author Helena Fairfax.
Posted by Victoria Chatham at 12:34 PM No comments:

Hello again! I'm happy to showcase three of Shelley Kassian's books. Shelley, a multi-published author, appreciates the corridors of medieval history and in particular the Tudor period. She has visited the United Kingdom, touring many castles in her pursuit of story. When asked, Shelley assists novice writers in building fictional worlds and enjoys crafting her own stories into novel-length fiction. She shares her life with her husband, adores her adult children, and lives in Calgary, Alberta, Canada.

Here are three titles showcasing her talents. A romantasy (romantic fantasy) , a historical romance and a contemporary western romance which I am particularly looking forward to reading.

The Scarlett Mark, A MedEvil Romantasy. Book 1 in The Odin Saga 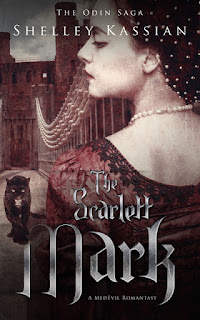 A Lord cursed.
A Princess cast aside.
A Mark that could change everything!

Seeking justice, Princess Scarlett challenges her stepbrother by way of a serpent test, unaware that her treasonous act will endanger her father the king, threaten her two royal sisters, and play into the premeditated plans of her stepmother—the queen. Known as a witch, the evil queen has an agenda to steal the throne and rid the castle of her stepchildren. Soon condemned to death, a risk taken saves the princess from execution, forcing the queen to banish her from the kingdom.

Cursed by the same spiteful witch, Lord Nicolai is most dangerous when transformed. Feared by everyone, he can’t see an end to his phantom life, until the princess arrives at his door. When a chase ensues to break the curse, the princess risks everything to save Lord Nicolai. Will a remedy be found in time, and how might the solution challenge the evil queen, should the Scarlett Mark prevail?

A Heart across the Ocean, published in February and celebrating Canada 150 and French heritage. 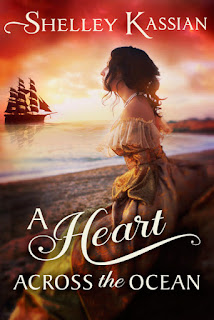 Fate cannot escape its guilty charge. Should the truth be discovered, the night watchman could detain Madeleine Bourbonnais once more…

A ward of King Louis XIV, Madeleine escapes from a Parisian hospital by accepting the king’s dowry, which frees her to immigrate to New France and secure a husband. Given her past and her condition, she’s an unlikely candidate for the Filles du Roi initiative, but when she arrives in the new world, she ashamedly accepts the admiration of a brave officer, hoping this handsome man could be the remedy for her misfortune.

A Captain in the Carignan-Saliere’s Regiment and a second son, Julian Benoit would never inherit the family estate, so he traveled to New France to serve and protect the French colony from Iroquois conflicts. When his commanding officer forces the statute of marriage, he complies with the edict, succumbing to a pretty mademoiselle, but he’s ill-equipped for her hidden truth.

Will Madeleine accept the challenges waiting to be borne in the new world? Can Julian recognize that this is the woman he’s been waiting for, and take her deeper into his heart and the demanding life of the Canadian wilderness, or annul their marriage and send her back to France, gambling the lives of all involved? 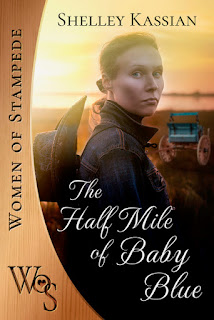 No family can conceal its past forever. When forgotten findings inside a suitcase reveal a stampede legacy, a new generation risks history repeating itself…After Kit Wheeler learns her family’s ranch has been threatened with foreclosure, she puts her former project manager skills to work to initiate a plan. Secrets are revealed, altering her objective and inspiring a wagon race laden with family conflict. To triumph, she requires a strategy. Her genius sister stages an auction and an attractive businessman scores the winning bid.Gabe Bradshaw first glimpses Kit through the pages of the morning newspaper. Drawn to her evocative portrait and baby-blue eyes, the President of TarSan Oil proposes a strategy to champion her acquaintance. His motives might seem suspicious, but Kit understands his gameplay.What distance will a family go to save their ranch? What risks will a man and woman take to reach the finish line? The only question remaining is, will they secure the Half Mile of Baby Blue?

Email ThisBlogThis!Share to TwitterShare to FacebookShare to Pinterest
Labels: A Heart Across the Ocean, Shelley Kassian, The Half Mile of Baby Blue, The Scarlett Mark 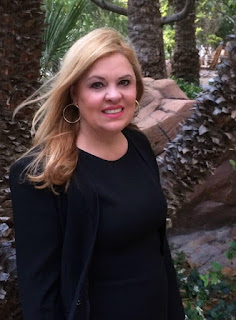 Today I'm happy to introduce independent author Shelley Kassian. Through the Calgary Association of Romance Writers of America (CaRWA) of which she is Past President, I've known her for several years now.

I've watched her progress from a can-I-write-this-book newbie to a hell-yes-I-can published author. Anyone who writes understands that initial apprehension when starting out on the journey of their first book, but the only way of overcoming that apprehension is to write, continue writing, and then pow! you have it in your hands. It is the most marvelous feeling in the world.

I'm sure you will enjoy learning as much about Shelley as I have done. And what's with Amsterdam? Oh, my!

Join me tomorrow, April 16th, to discover a selection of her books.

QUESTIONS:
1.    When and why did you start writing? What is it about writing that satisfies you the most?
I began writing as a young adult but didn’t seriously pursue a writing career until my kids were adults. My first manuscripts were justice driven with each story premise embracing a goal to change the world and make it a better place. I am most satisfied with the resolution of a novel. That blissful place when a hero and heroine find a happily ever after. Love is satisfying.

2.     What type of scene do you find the hardest to write? Funny, romantic, scary, or sad?
Horror. When I returned to writing, seeds of an ebony colour, a shade separate from the romance that rules my heart, found a way into my muse. The inkling to scribe what I now term a romantasy wouldn’t let go, and so The Odin Saga was born with her elements of MedEvil darkness. To assist with the creativity, to drive me deeper to the plotting of nastiness and despair, I listened to music. Metal music my Nocturna such as Carnival of Lost Souls. It was effective.

3.     What advice about writing do you wish you had given yourself early in your writing career?
I took a pause in my career and gave up on writing. I wish I’d had the courage to persevere and push through the obstacles that got in the way. I’m grateful my words, my muse, came back to me, and I really appreciate the friends, colleagues, and family who have supported me in my journey along the way.

4.     How did you feel when you held your first book in your hands?
I published my first novel, The Scarlett Mark, the summer of 2015. I cried when I held her in my hands and she’s still special to me.

5.     Do you read your reviews? If so, how do you celebrate the good and get over the bad?
I don’t look for reviews, but when I find them and they’re positive, I feel I’ve accomplished my job as an author. Every author will receive a ‘bad’ review. I feel it’s important not to respond. If someone doesn’t like my book, what can I say that will make a difference? I understand that some readers will enjoy my style of writing and some won’t. I’m okay with my work being evaluated. And I’m grateful to every reviewer who takes the time to share their opinion, whatever it might be.

6.     If you weren’t a writer, what would you be and why?
When I was a young girl, I wanted to be a rock star. I dreamt of holding a mic in my hand and wearing tight black leather pants. I have sung in a church choir and a rock band. I love singing almost as much as I love writing a novel. Though through my characters, I can be anything I want to be!

FUN QUESTIONS:
1.     What holidays do you most like to celebrate?
Christmas. I love everything about the season. Decorating the tree, the house. Shopping for gifts for the family. I used to sing at the Christmas Eve candlelight service at church. Silent Night. All is bright. If I close my eyes I’m there again, harmonizing.

2.     What is the most memorable class you’ve ever taken?
I acquired a Professional Editing Certificate when I became serious about pursuing a writing career. I enjoyed learning how to perfect the written word with clarity, style, and grace. Language is a puzzle. It was great fun learning how to better construct my words into meaningful sentences.

3.     If you were marooned on a desert island and could only have one book, which book would that be and why?
I hope my book could be a journal, as I’d have plenty of time to scribe my next novel, freed from the constraints of everyday life that often get in the way.

4.     What is your idea of perfect happiness?
I love the ocean. Perfect happiness to me is watching the waves roll, breathing salty air, and all while holding a glass of Riesling or Blackberry wine. I’m fortunate to own a cottage nestled on a granite mountain beside a bay of the ocean. Every once and a while orca’s venture inside; I’ve yet to see them.

Have you ever:
1.     Lied about your age? Never. I’m honest to the core.
2.     Danced naked in the rain? Nope. But I have danced in the rain. It’s an exhilarating feeling.
3.     Called in sick to work when you weren’t sick? No. Too dedicated. I went to work when my gallbladder was attacking! Crazy.
4.     Won a contest? Not yet.
5.     Eaten ice cream straight from the carton? Yes. Probably a strawberry or cherry flavour.
6.     Locked yourself out of your house? Yes. My car, too.
7.     Ridden a motorcycle? No.
8.     Taken an enormous risk? Maybe.
9.     Gotten lost in a strange city? Yes. Amsterdam. The Red Light District. Only Shelley Kassian would find herself in the naughty zone and wonder: “What are those girls doing behind those doors?” But alas, it was the oldest part of the city. I laugh about it now.
10.  Eaten a whole packet of cookies? No.
11.  Watched the stars at night? Yes.


You can find out more about Shelley at these links: