Phoebe's wedding. Now, Regency weddings were far simpler events than they often are today. Members of the ton, the upper echelons of society, e married at St. George's Parish Church, located in Mayfair. As many as three ceremonies a day took place there, which did not give much time between one couple and the next. So there was no decorating the church as is often the way these days. The white wedding gown that is so much the hallmark of modern weddings did not become popular until Queen Victoria married her Prince Albert on the 10th February, 1840.

But back to Phoebe. For a simple family wedding there would be very few in attendance. The minister and clerk, bride and groom, their parents, and their friends. The bride might have had a bridesmaid and the groom a best man, these would have also stood witness to marriage. The bride might have worn her best dress, sometimes her only dress, and a light meal would have been served in the bride's home. 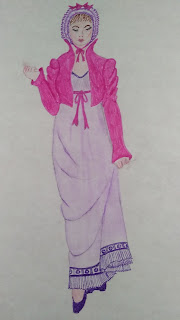 Phoebe's father and aunt insist she have a new outfit for her wedding and for this I made use of illustrations in Tom Tierney's Fashions of the Regency Period Paper Dolls (Dover Publications Inc 1996.) I have never gone as far as cutting these out, the book is far more useful to me in its entirety.

Next week I'll show you what her groom, Lord Andrew Fitzgibbon will wear.

Posted by Victoria Chatham at 2:05 PM No comments:

So here I am, at it again. Writing, that is. The current work in progress is Those Regency Belles Book 3, Phoebe Fisher. Here's the premise:

Phoebe Fisher’s generous dowry attracts many suitors. When they discover Phoebe’s one notable and outstanding flaw, they depart as quickly as they arrive, and she loses hope of ever finding a suitor who will love her just as she is.

After an absence of ten years, Andrew Fitzgibbon returns home to discover he is the sole heir to his deceased uncle’s title and estates, but it will take a fortune to save it. Although reluctant to press his suit to a young lady simply for her wealth, Andrew finds her intriguing and suggests a union that might suit them both. Phoebe agrees, but then events from Andrew’s past cloud their new life together.

Will these threats make or break them? Will their marriage of convenience grow into a love match, or will Pheobe never know what it is to love and be loved?

Posted by Victoria Chatham at 2:51 PM No comments: