How do you encourage reading in children? Good

I have no idea how people go about teaching children to read these days.

I can only fall back on how I encouraged my children to read in the 60s. One thing I did do, for which I was seriously mocked, was read aloud to my baby bump. After she was born, I read to my daughter every day. We had rag books which could be washed and re-read and there was always one stuck in her pram. By the time I was pregnant with my second child, my daughter and I read books together to the new baby bump and then the same with my third child, even if the book was only a picture book of farmyard or zoo animals and we read the name of the animal. 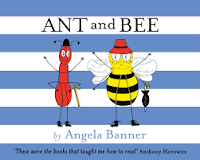 themselves and one that I would read to them. They all started with author Angela Banner's Ant and Bee books. They particularly enjoyed Ant as he was often naughty while Bee was a bit more sensible. Simple three- and four-letter words were repeatedly printed in red (like the old Reader's Digest advertising letters) and the parent (or whoever) read the black print text. It wasn't long before my kids were reading the whole book for themselves. Other series were the Beatrix Potter and Ladybird books.

There were always books in our house and I followed the routine set by my parents. We didn't have TV until 1956, and only then because I regularly disappeared to the next-door neighbor’s house to

watch The Lone Ranger. Once we had done our school work and reading, then we could watch TV. My children could watch the children’s hour programs from 4.45 pm until 6.00 pm and then the TV was switched off and the reading began. They read a page from their books, each helping the other, and then I would read a chapter of the family book to them. The last book we read as a family was Watership Down.

In between times, while other parents refused to let their children read ‘rubbish’ comics, mine had their pick of whatever they pleased, one comic each per week which they all shared. They had their pick of the Dandy, Beano, Bunty, and Beezer and often, the day after getting their comics from

the local newsagent especially, several of their friends would magically appear and sit and read them, too. Whatever the cost of these comics was well worth the expense as the kids devoured them. I'm not sure if my neighbors noticed any improvement in their children's reading but all the kids were encouraged to read the words and not just look at the pictures.

I hear today that parents are encouraged to not teach their children to read at home as that is a job for teachers and schools. I don’t agree, especially with early reading programs like Hooked on Phonics and LeapFrog readily available. I can’t think of a more pleasing aspect of being a parent than sitting with your children and sharing the written word. My children are now all in their fifties and still avid readers. I like to think they had a good start with what we shared as a family.

Visit the following authors to see their opinions on the subject:

Posted by Victoria Chatham at 1:30 AM 16 comments: